I was reading an interesting post on Bookish Us about an article at The Guardian on tricking men into reading more books.  The Guardian post links to another Guardian post in which Ian McEwan says the novel will die when women stop reading. The degree to which this project scares or saddens you depends, I suppose, on what you think  a novel is supposed to be.  On Friday, I collapsed the differences between Jerry Lee Lewis and Grandmaster Flash because they’re collapsible, up to a point. William Faulkner and mass-market popular fiction…not as much.

Do men read less than women?  I sort of doubt it, but they do seem to buy fewer books.  Since my MFA thesis is a novel, and I have another one about 2/3 finished in manuscript form and I hope to finish and sell them both this spring (agents, feel free to use the contact form),  I think about these things.  There are probably all kinds of reasons that men don’t spend as much money on books as women do,  but it does seem to me that over the last 10 years, the commercial publishing industry has committed hundreds of millions of dollars to cutting its own demographic in half.  The devil may wear Prada, but I don’t know many men who read Lauren Weisberger. I know that reference is a bit dated, but you get the point.

Yes, most of the books geared specifically to people who enjoy mass-market fiction aren’t landing in anyone’s serious canon anytime soon.  And there are books and authors that do fit into pre-existing market for guys who like to read.  But what about making readers out of men who don’t?

I’d start with Hemingway.  Sure, it’s like that scene in High Fidelity (ahem) where Jack Black makes fun of John Cusack for going with safe choices, but Nirvana makes Rob’s Top Five for a reason.  So I’ll start with Big Papa.  If Judy Bloom can get new covers geared to today’s tween demographic, surely a marketing department can come up with some manspired covers for The Old Man and The Sea or The Sun Also Rises. I’m not saying this would transmute every non-reader, but it would be fun.  This is a good start, but we can do better. How about Edith Hamilton’s recently re-branded Mythology?  (I actually don’t like the new look, but they’re trying. What they need is Zack Snyder’s design team.) You know what I would buy the crap out of for all of my friends who hate their office jobs?  A copy of Bartleby The Scrivener with a bleak circa Fight Club office cubicle cover.

Speaking of.  I like Chuck Palahniuk.  His rhythm makes sense, sounds honest to me.   And he gets savaged by genteel critics and then  doesn’t have the good sense to not respond.  I love all of this.  (Speaking of which, I just remembered that last night I had a dream where I was hanging out with Liam Gallagher. He was delightful.) There’s nothing flowery or excessive about what Palahniuk does.  He just sort of sounds like the sad, exasperated voice most many  live with and don’t talk about.  What Updike called “quiet desperation” via Thoreau.  I don’t read his more graphic stuff, but I have to say that his nonfiction collection is great and Rant and Diary are two of my favorite recent reads.  He also writes great essays on craft.

Faulkner.  Before I read The Sound and The Fury, I thought my mission was to sort of be a more hopeful minimalist in Palahniuk’s line.  My first novel (still in draft and still in progress) is sort of like that, with some narrative flourishes that Chuck (and certainly Gordon Lish) would excise.  But then I took a vernacular class with Robert Antoni and really read The Sound and The Fury and the scope of my quarry (and thesis project) changed.  I’m going bigger.  Sometimes too big, but I’ll work all of that out by graduation.

Picking up from where Friday’s post was originally headed, I also want to say this: the publishing world doesn’t need a punk moment to reach out to men.  It doesn’t need a new rock ‘n’ roll or a new Elvis.  It just needs to stop casting the entire literary enterprise as something implicitly attractive to women or the speculative niche.  And some good books with a few cus words and nuance.  And awesome covers.  Like I said, agents should feel free to use the contact form.  You know you want to.

And also, I did these: 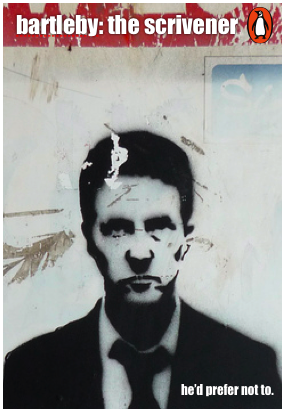 Penguin and Vintage logos are fair use (satire).  Book design elements by me.