Read from the bottom up.

Am I totally off?  I am blind to the new reality that says in the absence of sane regimes, pre-emptive wars are okay?  And if I’m wrong about that, then everyone who was or now is against the Iraq war was/is wrong about that.

Let’s not forget that with the Iraq war, there’s some legal cover.  After all, that regime was in open violation of the terms of the Gulf War cease fire. I’m not saying that makes it right, but it might make it legal.  What similar precedent do with have with Iran?

You want to change the regime in Tehran?  So do I.  Is this how we’ll do it?  Good God, what have we learned? 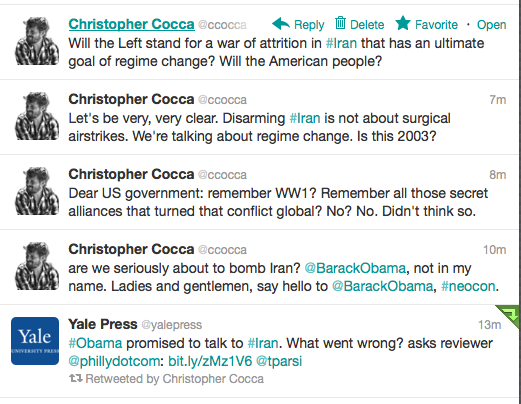 Look, I don’t think Iraq and Libya are the same situation or have identical sets of circumstances.  I do think that the only legal rationale for either action is the pretty standard assumption that once your regime starts killing civilians, your regime loses the sheen and protection of an observed sovereignty among the nations.  It’s the closest thing to international common law we have.

Related:  Does it feel to anyone else like as soon as President Obama took office the media stopped reporting very much about Iraq?  Everyone keeps saying Afghanistan has become Obama’s war, but you just don’t hear very much about Iraq, or about protests and calls to hasten the official end of our presence there.  You hear bits and pieces, you hear reports, but it’s not like it was.  I don’t have anything else to say about that, really.

In my heart, I feel like striking military targets in Libya to impede government forces from killing people is a good thing, but let’s not forget that the Libyan resistance is not unarmed.  They’re underarmed, to be sure (there’s no Bill of Rights in Libya), and yes, the government fired first.  The sham regime lost any lingering claim to sovereignty it had that day, which was weeks ago.  It’s simply just the case today that in attacking Libya now, we’re not only protecting peaceful protesters. We’re also aiding an armed resistance.  The armed resistance is acting in response to its unjust treatment by the regime in the only way that makes any rational sense.

I know a lot of people who believe in total pacifism.  People who believe that nations and oppressed groups can collectively turn the other cheek when their civil disobedience is met with murder as a matter of national political policy.  Most of these people are Americans who will never really have to worry about choosing between ideology/Anabaptist piety and protecting their families from agents of the government.  Some of these people tell me that the cross is God’s sign that violence is not overcome by violence, and most (not all) of these people live in relative safety. At any rate, we Americans, we French, we British, most of us, anyway, have the absolute privilege of being morally and spiritually vexed.  People living through it need to do just that, and they need our prayers, our support, our solidarity.  Figure out what that means for you.  Then do it.