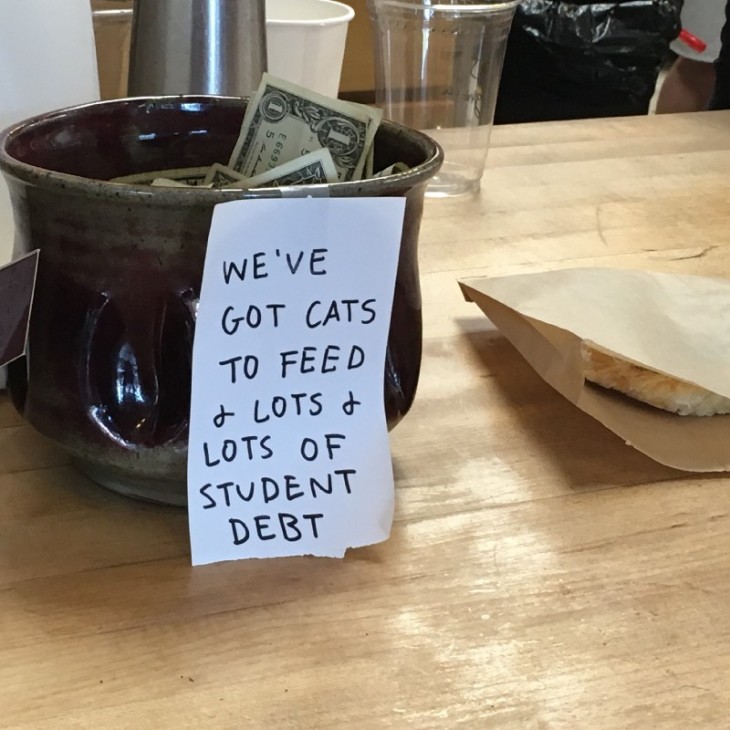 My wife is easy to like. She is charming, caring, smart, funny, and works in addiction counseling, specifically on the front lines of the…

Source: Forgive Us Our Debts: My Millennial Marriage in the Crucible of Helping and Hardship

“Every gun that is made, every warship launched, every rocket fired signifies, in the final sense, a theft from those who hunger and are not fed, those who are cold and are not clothed. This world in arms is not spending money alone. It is spending the sweat of its laborers, the genius of its scientists, the hopes of its children. The cost of one modern heavy bomber is this: a modern brick school in more than 30 cities. It is two electric power plants, each serving a town of 60,000 population. It is two fine, fully equipped hospitals. It is some fifty miles of concrete pavement. We pay for a single fighter plane with a half million bushels of wheat. We pay for a single destroyer with new homes that could have housed more than 8,000 people. This is, I repeat, the best way of life to be found on the road the world has been taking. This is not a way of life at all, in any true sense. Under the cloud of threatening war, it is humanity hanging from a cross of iron. […] Is there no other way the world may live?”

Alexandria Ocasio-Cortez is calling for a Green New Deal. Kamala Harris is calling for tax cuts that actually cut taxes for the middle class. Everyone wants to know how we’re going to pay for these things. I’ve been kicking some ideas around today in partial conversation with a friend.

A Green New Deal will probably require a graduated system. In general terms, Ocasio-Cortez suggests that some portion of the top wealth of the wealthiest people will be taxed at 60 or 70 percent. Maybe that seems unfair to you. What seems unfair to me is that the payroll taxes of middle class people provide more revenue to the federal government than do corporate taxes. Separately, the effective payroll tax rates of the wealthiest Americans are minuscule in comparison to most working Americans. The payroll tax is one of the most regressive taxes there is.

Higher rates at the very top, it seems to me, would help make everyone’s life better. Someone has to finance the saving of the planet, and unless the ultra-wealthy are banking on terraforming Mars in the next few decades, they have just as much of a vested interest a Green New Deal as the rest of us. And are we really supposed to believe that a high tax rate on the very top levels of the income of the wealthiest Americans is a burden?

And yet, people who oppose higher corporate taxes (which, honestly, shouldn’t be all that controversial given the true tax burden in this country) are going to frame this as Democrats coming after the paychecks of middle class people.

But an actual tax cut for the middle class? How about we eliminate the employee share of the payroll tax and replace it with an increase in corporate tax? Maybe reduce the payroll tax for small businesses under a certain threshold?

One of the biggest obstacles to any of these reforms will be the power of people who demand corporate profit has passive income. Sure, we need investors. But we lionize and exaggerate how brave their risks tend to be. How cursive, which carries social and cognitive benefits, became the latest fetish of the analogue authenticity set

Penmanship, the Engine of Democracy!

Oooopsy daisies, Mitt Romney.  Poor women who stay at home to raise kids don’t have the dignity of work enjoyed by rich mothers who do the same (and don’t have to worry about things like where their next meal is coming from).

Mitt, this is why you’re the worst. You flat out said there’s no dignity of work in home-making or child-raising.  Until Hilary Rosen went off on your wife.

I still agree with Anne Romney: raising kids is work, and it’s hard.  Is it easier with the kinds of means the Romney family had at their disposal?  Of course!  But it still isn’t easy. I’m sure the Romney kids had a nanny. I’m sure the nanny had healthcare…

This is from March, 2012.  I’m reposting it today because everyone seems to think Mitt Romney is going to save the world from Donald Trump.  Or something.

I used to read a blog called Paleofuture. It’s still out there, somewhere. One day, Paleofuture posted a picture of someone’s 70’s vision of an 80’s space station. Sure, every time I see a ’57 Chevy or googie architecture, I wonder why the future Walt Disney invented for the Boomers never, ever came. But I was a kind in the 80s. The picture of the space station was a sort-of writing prompt. This is from 2012, maybe:

I was a kid in the 80’s and got to go to EPCOT.  I used to read Popular Mechanics and try to make crap out of batteries and magnets and draw fighter jets and space stations and curvy future cars and build paper ammo wristbows from rubber bands and hangers.  I did The Jason Project.

I remember when the Challenger blew up because the lady teacher had a kid  my age and my family had an Aerostar the first summer they came out.  After it happened Ford pulled the commercials that showed how the nose of their new mini-van looked just like the Shuttle.  I broke the sliding door with my first GI Joe and burned my arm on an interior light and it scabbed and cracked and leaked all summer and I’d touch the puss with the fat tips of my fingers to see if it would hurt.

My grandmother made me watch INF when I was 7 so I could say that I’d seen history.  She didn’t say it but in 1987 you had no way of being sure you’d see more big human moments.  Imagine living like that for 4o, 50 years, thinking about the button, building schools with fallout bunkers, doing drills. I remember the first time I saw a plane, it was Wednesday, 9/19, 2001.  I went to college near a  power plant with two cement torch chimneys so these things made me nervous.  I imagine living like this for 40, 50 years, collecting history for my son just in case it stops.  Waiting for the break, the thaw, the perestroika. The Western glasnost Gorbachev and the Dubai-Vegas-Beijing Red Dawn white trash show.  Waiting for the INF bombs to come in off the market.  There is no end of history, Francis Fukuyama. There is history or nothing.

Obama will close Gitmo but will hold enemy combatants indefinitely without trial on the mainland.  Semantics must be justice. There are pictures of Pelosi toasting Cheney and Shepard Fairey laughing, obey, obey, obey, obey the giants and their posses.  I was a kid in the 80’s.

I thought we’d have more now:  sustainable communities instead of social networks.  Colonies in space.  We got personal computers, personal accessories, personal devices, vanity, vanity, vanity, rah rah trips to ISS but lazy outward pushing.  If Richard Branson brings the heavens we should fill them.